Thank you IceBreaker694 for the tag! Guys if you’re not already following Icebreaker 1. Where have you been? and 2. Go click the follow button over there 😀

1. The book that started your love for reading
Hmm my answer can vary for this question. DR Suess when I was little, Virginia Andrews in my tweens, Hunger Games in teens, I’ve never stopped being a reader but these books definitely mark a change in the books I read and a switch of genres.

2. An Iconic classic you’ll always love
To Kill A Mocking bird, I literally broke my old copy because it fell apart from re-reads. I have a new pretty version as well as an e-book version so I don’t damage my physical copy so much. I read TKAMB at least once a year.

3. A book you lost interest in because it’s literally everywhere
The Wrath & The Dawn by Renee Andiem I’m really interested in the plot for this but I’ve just seen it around everywhere, the hype is everywhere so I’m giving it a miss for now and I’ll pick it up later on down the track.

4. A book that reminds you of other books but you still love anyway
On The Fence by Kasie West This book was your cookie cutter contemporary but the writing, humor and characters made what could have been a huge cliché work and have some fantastic themes included.

5. A book series you have not started because of sheer size
Pfft size means nothing give me a 900 page book I’ll eat that for breakfast . The Game of Thrones series and it’s not because the books are 800+pgs its because there are only 5 books and we don’t even know when the 6th book is coming even though the 6th series on TV has finished, like WHAT? WHY? I would have been very angry if I waited all those years for a 6th book (especially how the 5th ends) only to be completely spoiled by idiots talking about the TV show. I realise that non bookish people don’t understand the concept of spoilers but SERIOUSLY! I hadn’t even watched game of Thrones when season 6 was airing and the radio I listen to spoiled the first episode the day AFTER it aired! I mean they did it on purpose, just started the broadcast and went “this person did this” oh sorry Game of throne spoiler *evil cackle*. I was angry on the behalf of fans and also myself as I did plan on watching and reading the books eventually. AND maybe I could have understood if they said a season 2 spoiler but to ruin an episode a day after its released! You’re just evil to the core. SO yeah I put off reading A Song of ice and fire because I wanted the whole set first but I finally caved and watched the whole series this month so I may as well start the books.

6. A Book that kept you up at night
Illumiae by Amie Kaufman & Jay Kristoff Wow, this book is just everything I could ever want.

7. Your bookish OTP
Feyre and Rhys & Rowan and Celaena both from Sarah J Maas series did you really think I’d choose anyone else? C’Mon guys are you new here?

8. A Firehot fast paced read
November 9 by Colleen Hoover. This book! I stayed awake nearly all night finishing this amazing piece of soul crushing greatness. I loved the characters, the plot had so many twists and turns! I could only imagine what would happen to our heads if Colleen wrote a thriller (I would read it, there is no chance I wouldn’t read a CoHo Thriller.)

9. Eevee – A series you’ll never get tired of seeing spin offs for
The Shadow Hunters I know a lot of people think Cassie’s just money grabbing but in all honesty she can take all my money if she gives me more Herondales. I would like to officially place an order for all the Herondales please and thank you.

10. A book series that was surprisingly awesome
Cinder by Marrisa Meyer. When I was first told about this series and recommended to it by lots of people I was really iffy on it, I mean a Cinderella retelling with cyborgs? ahh to say I was hesitant is an understatement, but its amazing and I can’t wait to read more Marissa’s amazing writing, HURRY UP HEARTLESS!

11. An Overhyped series your still excited to read
The Vampire Academy I never read this series when I was in my Vampire stage so that’s pretty sucky  Well I borrowed the first book from a friend so I’m going to read it and see if I like it, hopefully I will but let’s be real Vampires in this time an age? We’ve gone through at least 5 different genre tropes since vampires were in.

12. Collectors edition you wished you owned 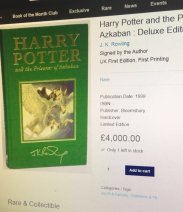 I’m not sure if its collectors BUT the copy of ACOMAF with the extra story in the back, Why hasn’t that come out online yet? If anyone knows where I can read it leave me a link or let me know PLEAASEEE
Also I seen this today The Prisoner of Azkaban SIGNED by the queen herself. if only I had a spare $7000

13. A Debut novel your really excited for

I’m not actually sure I have one for this… maybe The Crowns Game by Evelyn Skye? But I’m not really THAT excited for it.

15. A book you’ve been waiting forever to be released

The Host sequel! THE HOST SEQUEL (let’s be real it’s not ever coming out) so Gemina!! I know I haven’t even waited that long BUT I NEED IT NOW. If someone seriously wants to lend an arc to me I will name my first-born child after you or even better you can have the child as long as I have GEMINA in my hands I don’t mind XD (I am also willing to sign over my soul if your into that sort of thing)

I tag EVERYONE that hasn’t done this tag yet! I think most people have already done this one but if you haven’t your tagged now, no take backs

Are you guys participating in the Pokemon Readthemallthon? It starts on Sunday and I’m so excited!