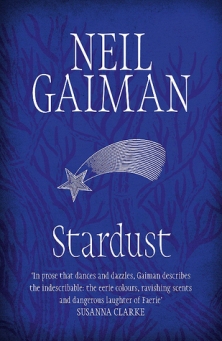 Neil Gaiman tells the story of young Tristran Thorn and his adventures in the land of Faerie. One fateful night, Tristran promises his beloved that he will retrieve a fallen star for her from beyond the Wall that stands between their rural English town (called, appropriately, Wall) and the Faerie realm.

No one ever ventures beyond the Wall except to attend an enchanted flea market that is held every nine years (and during which, unbeknownst to him, Tristran was conceived). But Tristran bravely sets out to fetch the fallen star and thus win the hand of his love.

This book is so beautiful and everything I love about books. The combination of whimsy and fairytales mixed with human emotions and wants.

“He stared up at the stars: and it seemed to him then that they were dancers, stately and graceful, performing a dance infinite in its complexity. He imagined he could see the very faces of the stars; pale, they were, and smiling gently, as if they had spent so much time above the world, watching the scrambling and the joy and the pain of the people below them, that they could not help being amused every time another little human believed itself the center of its world, as each of us does.”

A Star, and a half human, a man, and a fairy, a fairy turned into a bird, A man turned into a mouse, witches looking for eternal youth, princes fighting for a crown, ghosts and unicorns. This isn’t even the start of all the magic that is included in this story.

I felt like Stardust was a mix of The Little Prince and Alice in Wonderland but something uniquely unlike those stories as it’s in a league of it’s on. I now understand why Neil Gaiman is a favourite of so many, his writing is amazing and my review will never be able to do this book justice.

Thank you to everyone who recommended I start his books here mainly Amanda at Cover 2 Cover Mom. I fell in love with the world from the first chapter. The people of Wall, the fairy land, the creatures, the fate of the fallen star, all of it combined with a huge dose of beautiful writing makes Stardust just extraordinary.

“There is a proverbial saying chiefly concerned with warning against too closely calculating the numerical value of un-hatched chicks.”

A Small review for a small book but seriously I am lost for words trying to explain just how magical this book is, luckily its super popular so you’ve probably read it yourself and understand how I’m feeling. If you haven’t read it I highly recommend you do ❤

Have you read Stardust? Or anything else by Neil Gaiman? What did you think of it?

I have American Gods on my TBR for next month and that book is a MONSTER I’m excited to read it though so I can watch the new TV series.

6 thoughts on “Stardust by Neil Gaiman”