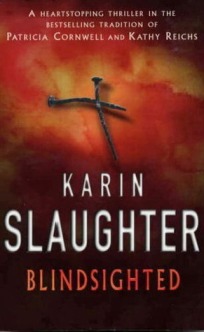 A small Georgia town erupts in panic when a young college professor is found brutally mutilated in the local diner. But it’s only when town pediatrician and coroner Sara Linton does the autopsy that the full extent of the killer’s twisted work becomes clear. Sara’s ex-husband, police chief Jeffrey Tolliver, leads the investigation — a trail of terror that grows increasingly macabre when another local woman is found crucified a few days later. But he’s got more than a sadistic serial killer on his hands, for the county’s sole female detective, Lena Adams — the first victim’s sister — want to serve her own justice. But it is Sara who holds the key to finding the killer. A secret from her past could unmask the brilliantly malevolent psychopath .. or mean her death.

Blindsighted focuses on the Main Character Sara, a pediatrician in a small town who also works as the coroner. Sara finds a dead body gruesomely slayed in a ritualistic killing and works with her ex husband the police chief to find the killer.

I enjoy gritty novels but for the squeamish of heart fair warning; there is A LOT of gore and details about the murders that take place in this book. Now the gorier the better is what I say but there was one scene that had even me ME cringing.

The story is a slow build and by slow I mean slooooow which is why I didn’t rate this higher. I really enjoyed the second half and how much it picks up as the case starts coming together but the start bored me a little.

I wanted to like Sara but she wasn’t as Kick Ass as I was hoping for. Sara isn’t a main character that is out there being a vigilantly which is good because I hate the characters that go head long into a crime without calling the police.

I mean a lot of books wouldn’t even happen if the MC just called the goddamn police when they were supposed to. But Sara wasn’t weak either, as we learn towards the end she has been through some traumatic things and that is the reason her actions are a bit askew at times but I also didn’t like her relationship with her ex with lends me towards the meh side of liking her.

Below are some very mild spoilers about what the character relationships are like, no plot spoilers I promise:

I don’t care if she was to busy tending to her job or just spending time ignoring you, you talk to her and work shit out if you love her NOT cheat on her to prove a point #prick

All my pet peeves aside I can’t wait to read more of Karen Slaughter and hopefully see some badass woman catching bad guys and finding love they deserve.

What are your feelings on cheating in books? Sometimes I can be okay with it, like I don’t mind Anna and the French Kiss or Maybe Someday but other times it really gets under my nerves.

Have you read this or any other Karin Slaughter books? I have the next 3: Kiss Cut, A Faint Cold Fear, and Indelible sitting on my bedside table now waiting for me to pick them up.

4 thoughts on “Blindsighted by Karin Slaughter”