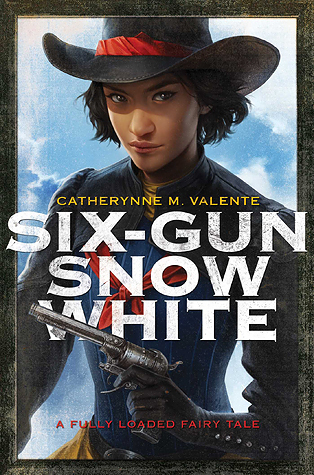 Forget the dark, enchanted forest. Picture instead a masterfully evoked Old West where you are more likely to find coyotes as the seven dwarves. Insert into this scene a plain-spoken, appealing narrator who relates the history of our heroine s parents a Nevada silver baron who forced the Crow people to give up one of their most beautiful daughters, Gun That Sings, in marriage to him. Although her mother s life ended as hers began, so begins a remarkable tale: equal parts heartbreak and strength. This girl has been born into a world with no place for a half-native, half-white child. After being hidden for years, a very wicked stepmother finally gifts her with the name Snow White, referring to the pale skin she will never have. Filled with fascinating glimpses through the fabled looking glass and a close-up look at hard living in the gritty gun-slinging West, this is an utterly enchanting story at once familiar and entirely new.”

Six Gun Snow White is a strange story but I expected nothing less from Catherynne Valente I mean all her books are written with lots and lots of description and prose. You can either love it or hate it and I am gratefully on the love side even if it does hurt my head at times.

“A stepmother is like a bullet you can’t dig out. She fires true and she fires hot and she fires so quick that her metal hits your body before you even know there’s a fight on.”

Snow white as she is dubbed, is a bi racial child that fit in nowhere, half native american and half white, with no mother she ever knew. She’s never the right shade and is locked away from friends and any company other then her step mother, she prefers her animal friends to people anyhow.

Snow turns 10 and in walks Mrs H her new step mum, who is and plays the part of the evil witch. Mrs H is evil in every sense of the world but she doesn’t have to use magic. She uses racist words and actions, bathes Snow in freezing cold milk and dunks her under repeatedly trying to make her white, dresses her up in finery and scrubs her down with tough brushes always to end with insults of how she just isn’t good enough, isn’t pretty enough, isn’t fair enough.

Once Snow hits 17 she’s up and out, on a stolen horse with a bag full of apples she’s ready to run with no mind as to where. Snow gets into fights, wins cards, works in a mine, finds her place in a small town and has to deal with the complete disgustingness thrown at her from white men, not only because she’s a pretty woman but because shes a woman of colour. Mean while her step mother has sent the Hunter out for her on a paid contract to bring her back dead or alive.

That’s it for the summary other then that there are trigger warning for rape in this book. What I would really like to talk about was the Native American rep in this book. I am white and Australian so I don’t know much about Native American culture but I can spot a stereotype and there were many.

More than a few times did I feel a bit weird reading this and had to search up some reviews by Native American people to confirm my bad feelings.

Unfortunatly there arn’t many reviews that picked up on the problems of this book but here is the one that I found detailing the problems in this story.

– This book is full of stereotypes of Native American people and isn’t refuted in the story. The step mum is an abusive racist old lady and she dies of natural causes and gets ugly- Not really a consequence as this is what happens in the original Snow White story.

– The Men are constantly harassing Snow and by harass I mean rape and multiple attempted rapes and all they get is bashed or shot by her, not one person calls this out or helps Snow.

– Snow is bathed in milk and basically has the “black” washed out of her, they are white washing her identity literally, they have isolated her from her people as she has no cultural knowledge, she’s beaten and made to hide and seen as shameful, this is “true” to the time back then but as the story was praised I expected someone to refute these actions.

– Snow was also really good at gambling and what little I know of native american culture I know this is one giant stereotype.

– Also a big stereotype I found was Snow constantly being described in animalistic ways, I know the prose and descriptions is one of my favorite parts of Valente’s writing but she is so amazing at writing she could have toned down the animalistic descriptions for a Native American character and gone for something else

” The dude watches another girl come out of the blind mole-skin she was walking around it. This one has muscles like a mountain cat and a kind of pretty he doesn’t know what to do with.”

I understand that these points we’re put in here to show what it was like back then and yes it is horrible but mixed in with magic it makes the whole thing seem a bit fantastical when this actually happened and is a part of history, As someone who isn’t even from America if I felt a bit weird then who knows what a Native American would feel when reading this representation.

The part of this story asides from the writing that I loved is the feminism. Snow meets a bunch of independent woman, she grows into herself, she never doubts her self-worth, and she sticks up for herself cheating, punching, kicking the men trying to bring her down all the way along.

“Love was a magic fairy spell. Didn’t the girls in my books hunt after love like it was a deer with a white tail? Didn’t love wake the dead? Didn’t that lady-love the beast so hard he turned into a good-looking white fellow? That was what love did. It turned you into something else.”

Snow also isn’t awakened by a kiss she isn’t a princess to be saved, she doesn’t need to be loved by a white man, she can choose her own will and make her own paths and she does.

3/5 stars – Also just a warning this book may be 150 pages but it took me 3 days to read the writing is tricky and pretty.