I feel like all I’ve been posting anything lately besides from reviews and TBR’s so why not a post that shouts about some awesome aussie young adult books and why I love australian YA.

Firstly why I love australian young adult and think you will too (even if you’re not in fact aussie) :

It’s topical. I’ve read a lot of YA contemporaries that are quick and good but essentially about nothing more the a coming of age story and quick teen romance. Don’t get me wrong I love these themes too that’s why I continue to read them but what I’ve found with aussie YA is the themes are deeper and really important. There is a big gap in the YA market for diverse books especially indigenous voices and I so hope publishers continue expanding their diverse book options even more than they already have.

The Sidekicks by Will Kostakis

The Swimmer. The Rebel. The Nerd.

All Ryan, Harley and Miles had in common was Isaac. They lived different lives, had different interests and kept different secrets. But they shared the same best friend. They were sidekicks. And now that Isaac’s gone, what does that make them?

A Shadows Breath by Nicole Hayes

Tessa and Nick are trapped in the car after a corner taken too fast. Injured, stranded in the wilderness, at the mercy of the elements, the question becomes one of survival. 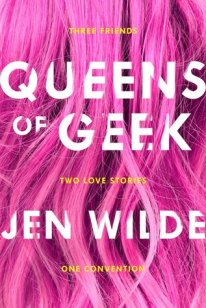 Queens of Geek by Jen Wilde

Taylor likes to blend in. Her brain is wired differently, making her fear change. And there’s one thing in her life she knows will never change: her friendship with Jamie—no matter how much she may secretly want it to. But when she hears about the Queen Firestone SupaFan Contest, she starts to rethink her rules on playing it safe.

If fourteen-year-old Kirra is having a mid-life crisis now, then it doesn’t bode well for her life expectancy. Her so-called friends bully her, whatever semblance of a mother she had has been drowned at the bottom of a gin bottle ever since her dad left them for another woman, and now a teenage ghost is speaking to her through a broken phone booth.

Every Breath by Ellie Marney

Poor main character, Rural character moved to the city, Family abuse (in the 3rd book to a side character), Loss of parents, Grief, PTSD.

Rachel Watts has just moved to Melbourne from the country, but the city is the last place she wants to be.
Despite her misgivings, Rachel finds herself unable to resist Mycroft when he wants her help investigating a murder. He’s even harder to resist when he’s up close and personal – and on the hunt for a cold-blooded killer.

When St Hilda’s establishes a Year 10 Wellness Program in response to the era of cyber-bullying, the three girls are thrown together and an unlikely friendship is sparked. One thing they have in common: each is targeted by PSST, a site devoted to gossip and slander that must have a source within St Hilda’s.

Who can you trust when rumour is the new truth?

Nevo was not born in the wrong body. Nevo just wants everyone to catch up with all that Nevo is. Personal, political and passionate, Finding Nevo is an autobiography about gender and everything that comes with it.

No Limits by Ellie Marney

Now injured, broke, and unemployed, he’s stuck back in the country, at his father’s mercy. Harris needs to pay off his dad’s debts, and fast. But working as a runner for a drug cartel is a dangerous path – especially if Harris agrees to narc…

All these books I’ve included I loved and thought they tackled hard issues in a respectful and well done way, I really loved all of the themes and if you’re interested in any of these subjects I hope you read and love them too 🙂