Eva and Miriam Mozes, twins and at 10 years old they are taken to Auschwitz in 1944. Because they’re twins they were separated from their Mother, Father, and Sisters. Instead of being lead to the gas chambers Eva and Mariam are left to Dr. Josef Mengele’s.

I have some knowledge of the Angel of Death: Josef Mengele having read numerous survivor stories so when I seen his name I was mentally pre-paring myself for the horrors to come.

Over all this book is very short and not very detailed. It is a recounting of what happened but it didn’t make me cry like other survivor stories I have read. I understand not wanting to delve into those memories but these books usually use the shock to show what a horrible disgusting thing was allowed to happen and prevent anything like it from happening again and reading about The Angel of Death there is no way I wasn’t shocked by how he treated people and his obsessive expirements but I just didn’t get that passion or feeling that other books on this subject have given me.

I feel pretty bad criticizing a memoir as it’s not the same as a fictional story but all I can say is that compared to others non fiction stories it was lacking an emotional connection.

Eva has done a lot in her life time and is still campaigning against wrongs and ensuring that we never repeat this crime,she is a courageous woman and I thank her for everything she has done and is doing despite the hardships and abuse she has and does face.

“I hope, in some small way, to send a message of hope, a message of healing. Let there be no more wars, no more experiments without informed consent, no more gas chambers, no more bombs, no more hatred, no more killing, no more Auschwitzes.”

TRIGGER WARNING: Please note the below images are graphic and show Eva and Miriam in Auschwitz. 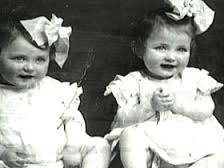 I would prefer not to give this book a Star rating as I don’t believe I should be the one to judge how well written or “interesting” a survivor story is.

If you’d like to read some information on what a monster Dr. Josef Mengele was and what he has done to affect so many lives in a horrendous way I have included some:

Mengele was a notorious member of the team of doctors responsible for the selection of victims to be killed in the gas chambers and for performing deadly human experiments on prisoners.

He would personally split up families leading one to the gas chambers and the other to the camps. Arrivals deemed able to work were admitted into the camp, and those deemed unfit for labor were immediately killed in the gas chambers.

Twins were subjected to weekly examinations and measurements of their physical attributes by Mengele or one of his assistants.Experiments performed by Mengele on twins included unnecessary amputation of limbs, intentionally infecting one twin with typhus or other diseases, and transfusing the blood of one twin into the other. Many of the victims died while undergoing these procedures. After an experiment was over, the twins were sometimes killed and their bodies dissected.

Mengele personally killed fourteen twins in one night via a chloroform injection to the heart. If one twin died of disease, Mengele killed the other so that comparative post-mortem reports could be prepared and he could study how there organs changed from disease and “natural death”

What are you favorite books on WWII? Do you know anyone that has been affected by this?

My partners grandfather was Czech and fled Europe for Australia after fleeing from the Nazis and not enlisting. He was wanting to go to America but the boat to Australia was due a month earlier then the American one so he came to Tasmania and then later to Melbourne. My boyfriends Grandparents on his mother side fled Poland but we never had the chance to know their story.

I think my all time favorites are Once by Morris Gleitzman, Night by Elie Wesiel, The Book Thief by Mark Zusak and The diary of a young girl by Anna Frank,  there are a lot more but I can’t remember them to well as I read them all so long ago.

8 thoughts on “Surviving the Angel of Death: The True Story of a Mengele Twin in Auschwitz”