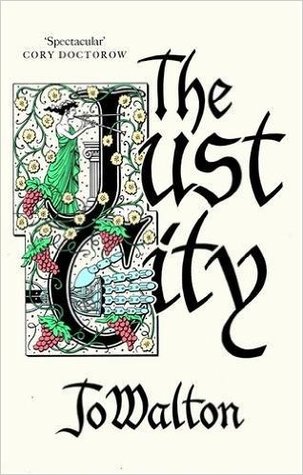 “Here in the Just City you will become your best selves. You will learn and grow and strive to be excellent.”
Created as an experiment by the time-traveling goddess Pallas Athene, the Just City is a planned community, populated by over ten thousand children and a few hundred adult teachers from all eras of history, along with some handy robots from the far human future–all set down together on a Mediterranean island in the distant past.

The student Simmea, born an Egyptian farmer’s daughter sometime between 500 and 1000 A.D, is a brilliant child, eager for knowledge, ready to strive to be her best self. The teacher Maia was once Ethel, a young Victorian lady of much learning and few prospects, who prayed to Pallas Athene in an unguarded moment during a trip to Rome–and, in an instant, found herself in the Just City with grey-eyed Athene standing unmistakably before her.

Meanwhile, Apollo–stunned by the realization that there are things mortals understand better than he does–has arranged to live a human life, and has come to the City as one of the children. He knows his true identity, and conceals it from his peers. For this lifetime, he is prone to all the troubles of being human.

Then, a few years in, Sokrates arrives–the same Sokrates recorded by Plato himself–to ask all the troublesome questions you would expect. What happens next is a tale only the brilliant Jo Walton could tell.

This book was so different from my normal reads it was refreshing. Robots, 10 year olds, People from all times of history, Greek Gods… All mangled into the one City? The city Plato wrote about in his book The Rupublic? Well what could go wrong?… How about everything

I haven’t read Plato’s The Republic so I went into this pretty naive in regards to what his view was and what his goal was but I think I picked it up pretty quickly.

The Just City is just that, it’s a city designed to be just. Everyone happy and being their best selves. No social status to live up to, no family to impress, no name sake to up hold. All there is is your own potential no matter of your race or sex.

The ‘Masters’ of the city all prayed to the god Athene and were swooped up and dropped into this city to create Plato’s Republic as best they could, using Robots from the future as workers to farm, cook, and labor they were left to the jobs of over seeing these tasks and teaching the children everything. From reading, to astrology, to wrestling, and running in Armour the children were to be risen up to their best possible potential and become philosopher Kings.

This is where things get a little wobbly, the kids grow and once they reach 16 they are sorted into there ‘metals’. ‘Metals’ is a concept told to the children letting them think they have Iron, Bronze, Silver, and Gold in their bodies and while they have all 4 some have more of one then the other (Basically it’s a class system).

Gold’s are philosophers and artists, while Irons are workers and child carers (Oh did I mention there’s a breeding program? Uggh). This divided them into a class system and allows the city to have much needed human help to keep everything running smoothly.

Truly this story tackles A LOT of great themes like gods not being all knowing, females and the oppression they suffered(there is a lot of rape), Males and their views on entitlement, what Just actually means. But I felt like the world we live in at the moment is pretty well versed in these subjects, so while they are very important I couldn’t connect with them in a real way.

I mean sure I could understand about the past and how hard it was for woman to strive for equality but I’m not a woman of the past so while I could put myself in their shoes I couldn’t truly because I haven’t had to deal with oppression like these characters.

I was so suspicious of him through out the entire book. I just couldn’t bring myself to fully like him after the first scene with him and the tree and his lack of comprehension that a woman would actually say no to him. Just because you’re a god doesn’t mean every woman wants to have sex with you Apollo!

Sokrates (Socrates) was my favorite character. He was a man of understanding and honor and he showed us what type of person he was by his actions. Sokrates is the only one who sees the workers(Robots) as people and tried to talk to them. I think the themes of slavery were so strong and the idea that people of the past actually treated other humans this way until someone showed them the truth was jarring and scary.

Simmea watched while her family was killed and was bought at a slave auction by the masters of the Just City. She is beyond clever and a fantastic artist. She is a feminist, she loved the options that were made available to her but she was also a bit to rosy eyed about the city and masters and I would have liked some rebellion from her.

Kebes:
Kebes was bought at auction at the age of 12ish (pretending to be 10) with Simmea. He hates The Just City, hates the masters, the island, the lessons. The only thing he doesn’t hate is Sokrates and Simmae. I loved Kebes until I didn’t…

Some stuff that just really got to me out about the whole Just City.

The worlds in chaos and I love it… Am I a bad person? Perhaps but I can’t wait to see how The Just City sorts its self out…

This book has some really important messages and undertones to the story, but more importantly it talks about being Just and exactly what that means. The philosophy around this book was fantastic and I’d recommend it to anyone interested in Greek Gods, Plato, and if you’re interested in strange books that really make you think.

13 thoughts on “The Just City By Jo Walton”

2020 has started off with a fantasy bang, first I binge read the Cruel Prince trilogy and now I’m about to finish Red Sister. I’m in love with the Magic’s and world building in this trilogy and excited to read Holy Sister. I’ll be stuck at the hospital this afternoon so atleast it’ll keep me occupied! . I’m currently 4 books in for January and my goal was to read 5 so I’m on my way ☺️
Went to return a pair of shorts and found a pop up bookstore had replaced the shop 😅 I haven’t read a cruel prince but I plan too and this was only $6 I also hauled the institute by Stephen king and The Toll by Beal Shusterman so it’s been a good weekend for books.
After how many years I finally read and finished book 1 of Game of thrones 🐉 . The book is so similar to the tv series I really enjoyed it. . I have a mass market paper back I picked up from a thrift store so I decided to put it on the rehabs bookshelves so others can read it and I’ll buy myself a pretty book set eventually😅
Finished and I’ve officially run out of books I actually want to read at the hospital. So far I’ve read: -nevernight (reread) -godsgrave (reread) -darkdawn -on the come up -dev1at3 -the name of the wind -wise mans fear -a spark of life -rivers of London (half read DNFd for now) -vengeful . I have 6 books sitting on my shelf waiting to be read but there all gifted thrillers and I just can’t be bothered with them. Time to get some ebooks 😅
Current read dev1at3 by Jay Kristoff who is helping me stay sane while stuck in hospital/rehab . 50 pages in and thank god for the recap that caught me up perfectly 😅
Starting A Wise Mans Fear, I think this is the first ebook I’ve read all year 😶 . . Also spring is pretty 💜