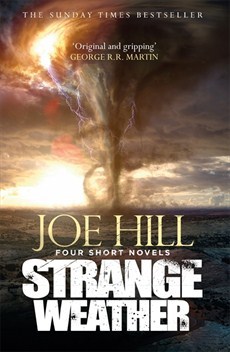 This book overall was really awesome and I enjoyed it more than I thought I would. Short stories can be really hit or miss but I shouldn’t have had doubt that Joe Hill could make each one of these compelling unique and incomparable to each other.

Snapshots concept was something I wasn’t expecting and it’s so well done. Hill mixes the element of fear so well with real world happenings I’m going to say this was the scariest story, for me atleast.

A tatted up guy stealing people memories with a Polaroid camera, taking photos of a vulnerable old lady mixed with an atmospheric thunderstorm setting, you get the perfect mix of edge of your seat thriller and the sadness that we can’t fix things with a magic wand. It delves deep into the real scare that is our loved ones becoming older and losing them to Alzheimer’s.

I toweled off my wet hair, my neck, and the lightning snapped for a third time, and Shelly responded to it with a low moan of unhappiness. Then I understood and I wanted to moan myself. All those flashes of lightning and not one crack of thunder.

I really enjoyed Max and the family relationships, for a 90page book I felt invested in all the characters right off the bat and would happily read a longer story about them.

This was the hardest story for me to read in the collection. I originally dnf’d because it’s so upsetting, I then skimmed the last page which I NEVER EVER do but there was no way I could have read it without being prepared for the ending.

There is a police shooting, a mall shooting, an anger filled gun rage, and children dying. *Huge trigger warnings on this for kids and babies being shot.*

Loaded is topical it shows how bad people are and how that escalates with guns. I’m not even sure what to rate it, it was so hard to read and that’s a sign of just fantastic writing but giving it 5/5 stars after making me feel this way feels weird. I’m upset and angry at Americas gun laws and what they continue to allow to happen JUST GET RID OF THE GUNS ALREADY.

The ending is as heartbreaking as I expected but deep down I knew it wasn’t going to have a heroes finish, that wouldn’t be what happens in real life even though I had everything crossed it would be okay. Loaded is about the abuse of white men in power, about disgruntled ex army men, scared children, abusive relationships and what adding a gun into these situations do. It made me uncomfortable, upset, and angry that this is actually fucking real I mean these things happen and nothing fucking changes. It’s all fucked up.

Aloft: 2.5/5 stars
June has just passed away from cancer and her two band members and her two brothers are doing a bucket list for her, all the things she never got to do in life, first up is skydiving.

Aubrey is scared of heights but he’s there more for Harriett (the chick he’s been crushing on for two years but you know June too). When the planes electronics go dark there’s no backing out, it’s jump or plummet.

SUCH A COOL PREMISE. Joe’s ideas can do no wrong in my mind, I mean falling onto a solid cloud! Awesome. Cloud reacting to your thoughts and making cloud furniture? AWESOME TELEPATHIC CLOUD.

Where this story falls flat is I didn’t like the main character and couldn’t care less about him. I would have loved to know more about the cloud and what it actually was but all we really got was a poor guy who’s friend wouldn’t date him even though he was a “nice guy”. Bleh! Stop pulling friend zone crap and get over it. He does in fact get over it but he annoyed me and I kinda wanted the cloud to just kill him already..

*trigger warning for an animal death although it’s not mean hearted, more so shows the effects of animals in the unnatural disaster.*

Rain is my favourite story so far, a chemical has been released into the atmosphere causing crystal rain, 1 inch to 8 inch needles raining down to impale everyone outside and even those under flimsy cover. The stories told as a recount of the event, spreading world-wide by being in the atmosphere the government blames other countries and terrorism starting wars between their chosen accusation.

Rain didn’t hold back and you could get so much meaning depending on who you talked to and how they read it. Hill’s great at showing government blights and how willing we are to accept their word for truth when they’re just releasing theories and causing more wide spread destruction because of it.
I did not see the ending of this one and it surprised and saddened me again reflecting on how the treatment of people can impact for years to come.

I’m not saying more than that because it’s a short story and really there’s nothing else except this was one of my favourite stories and I loved the pacing and developments unfolding. Hill really knows how to cut out the unnecessary and get down to the nitty gritty whilst maintaining enough clues that upon looking back you’re surprised you didn’t pick them up earlier.

So there you have it 4 reviews for 4 short stories all in one bundle of thrill. I would recommend this if you like thrillers, well delivered concepts, and having society reflected in truly horrific ways which in my opinion is more scary then paranormal horror that I can dismiss as fantasy. Every story has great underlining themes and reflects on us as humans. To be honest fans of Blackmirror should get on this ALSO fans of this book should watch Blackmirror, it is mind spinningly twisty and great.

Have you read Strange Weather yet? What was your favourite short? Are you planning on picking this up soon?

One thought on “Strange Weather by Joe Hill”